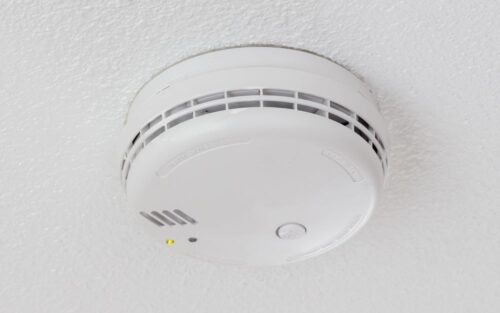 Nobody ever wants to hear their smoke alarm going off. It is never a good thing. But occasionally it needs to talk to you because it needs service. Dirt, bugs, battery, or just old age can all cause the smoke detector to begin chirping at you.

Here are some of the more common reasons your smoke alarm is making noise, along with what you can do to make it stop and bring back peace and quiet.

Most smoke detector chirping is related in some way to the battery. Even hard-wired detectors have battery backup, because they are worthless without power and a fire can get to the power supply before smoke gets to the alarm.

Virtually all smoke alarms are designed to begin chirping when the battery power is getting low. This is to alert you to change the battery before it is completely dead. This is a safety feature to ensure proper operation.

A smoke detector beeping or chirping every 30 to 60 seconds is usually a loud hint to change the battery. Almost all alarms use 9 volt batteries. (It is a good idea to keep a couple around the house all the time.)

Just grab a step ladder and a new battery after reading the instructions to learn how to change the thing. If the directions somehow managed to disappear, you should be able to find them on the manufacturer’s website. Almost no one remembers how to get into a smoke detector. You only do it once every 5 years or so. Although there are many different types of alarms, the basic ideas are the same. Remove the cover, access the battery compartment, change the battery, replace the cover, and press the test button to make sure all is working.

Our Kidde hard-wired smoke detectors are exactly like that. A 5 minute operation and the noise stops. I suggest you do all of the smoke alarms in your house when the first one makes noise. Because you know that the rest are just waiting to start beeping.

Most smoke alarms are designed to last 10 years. As far as I know, this is not a scheme to sell more product. It is a safety issue. Some of the alarm’s components begin to deteriorate and/or quit functioning at their optimal performance level. Because the safety of the household is the reason it exists, the detector will start making the same intermittent chirping noise, alerting the home owner that it is reaching its best before date.

The first thing most people will do is replace the battery. If it is still chirping after the new battery is installed, you will have to take a look at the manufacture date. You can find this on the baseplate–usually on the inside but occasionally on the back. Meaning you will have to remove it from the ceiling to take a look. If it is getting close to the 10 year age, replace the one beeping and all of the others in the house. They were probably all installed at the same time and/or have been replaced at the same time.

Replacing hardwired or battery-only smoke alarms is essentially the same program. Get the cover off, remove the 2 screws holding the baseplate to the ceiling or wall, and install the new unit. The only difference is the 2 spade connector wires you will have to disconnect from the old wired unit and connect to the new unit. Install a new 9 volt battery and re-attach the unit to the ceiling. (Most new smoke detectors are sold with a new 9 volt battery.)

Note: Some of the newer smoke detectors come with sealed in lithium batteries that last 10 years. This eliminates battery beep. The unit is programmed to start beeping shortly before its 10 year lifespan is reached.

3) Dirt Build Up in the Sensor

Although rare, it is possible for dirt, dust, even spider webs to cover or partially cover the sensor and give you a false positive. Some sensors are very sensitive and will start reacting even to small particles of dust or pollen. Usually by beeping or chirping occasionally. But sometimes it will go into full-blown alarm mode which could cause a little bit of panic in the house.

It is a good idea to clean the alarm regularly with a can of compressed air, your vacuum, or even running a Swiffer dry duster over it. (Make sure the Swiffer is new and clean.)

As mentioned before, most smoke alarm chirping and beeping problems can be traced to the battery. Here are a few more that might be causing your noise.

Building codes are demanding more and more smoke detectors in new homes. And all of them are connected to ensure that all of them will sound an alarm when one senses smoke or heat. This technology can cause a few issues when you are trying to isolate a chirp.

By design, smoke alarm noise is loud and penetrating. If you have multiple interconnected devices going at the same time, it can be challenging to find the one causing the problem. (And there is usually a bit of panic involved.) Once you find the culprit, pushing the reset/silence button will give you a respite and usually enough time to discern the problem and fix it.

If you have a detector that is just chirping occasionally, that can be almost as difficult to isolate because it is intermittent and the noise seems to be everywhere. You never seem to be standing under the right unit. Or you stand there and nothing happens.

The best way to avoid these issues is to keep all of the alarms clean and change batteries as soon as the first unit chirps.

Note: The National Fire Protection Association standards require all smoke detectors to produce a minimum of 85 decibels of sound and no more than 110 decibels of sound. These are sound levels between a food blender and rock band.

The National Electrical Code states that smoke alarms shall be placed inside all sleeping areas, outside all sleeping areas and on each floor of the house all wired together. (If one goes off, they will all go off.) This is why you will see smoke alarms sold in groups of 4, 6, 8, and more units. They all went in together, they all need to be changed at the same time.

Older houses without a wiring system can use battery-operated smoke detectors. Although you can get something like the X-Sense Wireless Interconnected Smoke Alarm System to cover the whole house and set them all off at once.